Life on the road would have been easier if only other drivers understood the dilemma of commercial drivers. Instead of having a bad attitude against truck drivers, it is better to gain an insight into common Q&A that most non-truckers ought to know.

Why do truck drivers move into the center and left lane even though they are not overtaking?

In most large cities in the United States, the center lane is usually the safest position for trucks. In fact, it is a type of defensive driving taught in the CDL school curriculum where truckers are specifically taught to move into the center lane on a 3 lane highway. Otherwise known as the ‘smith system’, the purpose of defensive driving is to give the trucker options to adjust in case something happens. If you encounter a truck on the center lane and you want to overtake, it is considered safer to use the left lane than the right side. On why the truck drivers sometimes use the left lane, it is mostly because they want to avoid a road blockage ahead. Truckers can see further ahead than car drivers on the road so when they spot a construction, break down or lane closure, they switch to the left lane immediately. However, as soon as the truck drivers have evaded the road hazard, they switch back to their respectful lane.

Why don’t truck drivers give out lifts anymore?

Why do truckers cut in other vehicles abruptly when overtaking? 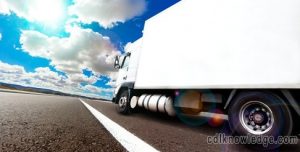 It is quite different than the previous maneuver and frankly, dangerous to both sides. It usually happens when a truck is on the right lane but when it approaches another vehicle ahead; it quickly switches into the other lane in order to overtake but makes the car in the left lane apply the brakes. If you watch closely, you will notice the trucker approaching a slower-moving vehicle before cutting off the car in the left lane. Of course, the truck driver can opt to hit the brakes when faced with a slower vehicle ahead but that would disorient the momentum and it would take a while before recovering the speed. Plus it will consume a lot of fuel and cause a traffic snarl up on the rear. But in order to move over into the left lane, there must be a small opening which the trucker capitalizes on expecting the car on the left lane to give more room by slowing down. So the next time you see a truck closing in at another vehicle at a faster rate, consider slowing down and flash your lights to give a pass. Truck drivers help out other car drivers too when overtaking and will appreciate such a gesture.

It has nothing to do with the character of truckers but everything with the company policy. Most truck drivers sign a binding contract with a cargo company that usually entails a clause that states drivers should not give lifts to stranded citizens. Nobody wants to risk goods worth a million dollars getting in the wrong hands plus a civil suit on top for breach of contract. In fact, there are companies that tell their drivers not to stop in case they witness an accident, as long as they are not involved. Of course, we are all humans and if an accident occurs where there are serious casualties and nobody on the scene, the conscience will react by pulling over to help the injured. But if there are other people on-site helping the situation then the truck driver is likely to proceed with the journey without stopping to know what is going on.

Why do truckers drive next to each other on the expressway?

Most trucks operate on speed governors that range between 60mph and 65mph. That means overtaking is a slow affair especially if the difference between the slower truck and the fast track is less than 3mph. The terrain plays a role too by making it take longer than usual to overtake. For instance, the fastest truck traveling at 65mph can become the slowest while going up a hill if it is heavily loaded while the 63mph truck appears to travel faster if is lightly loaded. Just like you guessed, it will take longer than usual for the ‘faster’ truck to overtake the ‘slow’ truck, especially on an incline. Additionally, slowing down will just consume more fuel and it will probably take half a mile or more before recovering the momentum. So the next time you encounter trucks riding next to each other, don’t tailgate but instead back off a little bit and keep the patient until it is clear.

Why do trucks curve too slowly?

Truckers cut off at least 10mph less than the designated speed limit put up on signs at road curves and ramps. It would be unwise to move at the same speed as cars since trucks have an elevated center of gravity making it easier to tilt depending on the load. If a trucker curves too fast and carelessly, the cargo might get damaged risking the receiver issuing a refund.