If you have watched the critically acclaimed Hollywood movie, Fight Club, you have probably heard the quote; ‘on a long enough timeline, the survival rate for everyone drops to zero’. In commercial driving, a similar quote; ‘on a long enough commercial driving career, having a bad day is inevitable’ is true. Ask any experienced commercial driver and they will vividly recall their worst day of bad luck on the road. However, it doesn’t mean that an accident is unavoidable if you are a commercial driver with years of experience. In fact, there are many commercial drivers who have never been involved in any serious accident since their first assignment. To the contrary, it means experiencing emergency setbacks on the road once in a while is certain like night and day. Hence, the question should not be when but how should you respond?

Brakes Failure- According to the Commercial Motor Vehicle Safety Alliance, an astonishingly high number of commercial accidents are caused by faulty brakes system. The good news however, is that it can be utterly avoided, and complete brakes failure is a very rare phenomenon. As a matter of fact, the technical term is “under-par performance”, since modern truck brake systems are designed in such a way that complete failure would raise investigative eyebrows, as a peculiar occurrence. Nevertheless, truck drivers commonly encounter braking deficiency and braking imbalance. The latter occurs when there is not enough equilibrium within the braking system and it is often characterized by one side dragging distinctively than the rest when the brakes are stepped on. On the other hand, braking deficiency normally occurs when the braking effects do not happen immediately as expected. Additionally, if the tractor brakes function before the rear brakes, then there is a problem. 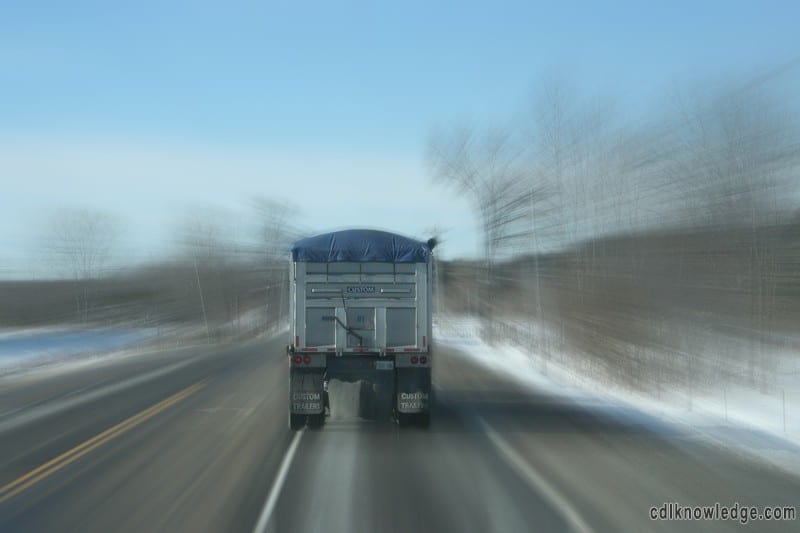 How to respond in case of a tire blow out-

How to respond in case of a brake failure- Prevention is better than cure and the best method to avoid brake failure is constant inspection. Improper loading can also put too much pressure on the brakes causing overheating and failure. Regardless, it is possible for brake failure to happen even after following all the standard procedure. The first and most important rule of every emergency situation is to avoid going into panic mode. It has long been established that humans make irrational decisions when they are in panic than when they are composed. However, acting fast can mean the difference between life and death. Switching on emergency lights is recommended to alert nearby vehicles. If there is another car ahead, sound the horn and switch on emergency flashers. Activate the emergency anti-lock brakes and shift to the lowest gear. Eventually, the truck will begin to slow down and in that moment, press on the parking brakes. It is only when there is a complete brake system failure that the driver is advised to maneuver and find a soft spot to crash on but only if there is no other option.

NB: A truck with over-inflated tires will likely maneuver through a pothole with a violent bounce.

This is probably one of the few situations where you have to reject your natural response to stimuli. DO NOT STEP ON THE BRAKES!!! In fact, it is better to keep on accelerating if you are not at a safe zone such as a narrow bridge to pull over. However, acceleration should only be done minimal for about 10 seconds while gripping the wheel firmly until the truck maintains control. Afterwards, you can release your foot off the gas pedal to slow it down before switching the indicator and making a road-side exit.

Engine Failure- Unlike other mechanical problems, engine failure does not discriminate. It could happen while you are driving or when you turn on the ignition key in the parking lot and the truck fails to start. Good for you if the truck’s engine failed to start on the parking lot since you are under protocol to alert the company’s designated mechanic to sort out the glitch. But what should you do if the truck’s engine fails in the middle of a highway?

How to respond in case of an engine failure– If an engine failure happens on the highway, it is likely the truck will have sufficient momentum to steer towards an exit. However, you should indicate the signals or switch on the emergency flashers. Once the momentum is reduced, change to low gear before slowing down on the road-side. Alert the carrier’s company response team of your location to come and sort out the problem.

Unforeseen cars, motorcycles and pedestrians- Most truckers have a far-sighted advantage and a short-sighted disadvantage on the road. Due to the size of commercial trucks, drivers have a hard time spotting other small vehicles which are closely in front, behind or side-ways especially on the right side. In fact, most accident which happen due to unforeseen objects, it is usually the car drivers who are at fault. Such car drivers fail to notice that if they cannot see the truck driver’s reflection on the side mirror while up close to the truck, it is likely they are on a blind spot. Regardless, truckers should take responsibility by following the appropriate precautions.

How to avert unforeseen vehicles- According to NHTSA, most accidents that are caused by unforeseen vehicles and pedestrians occur at intersections. Even in CDL School, truckers are taught to activate turning signals to alert drivers who are at blind spots. Look out through the window if necessary and slow down by hitting the brakes before making that turn. Remember, if a car hits you from the rear, it is usually the car driver who is at fault. Fortunately, nowadays trucks are equipped with cameras to give a view of the rear.

The most efficient way to avoid an accident is to be extra careful. Never drive a commercial truck if you are not confident of its condition. If you cheat on the log book, you are cheating yourself in the long run and even if you earn more income, that tip won’t help you prevent an accident. Commercial driving rules and procedures were set out for a reason.